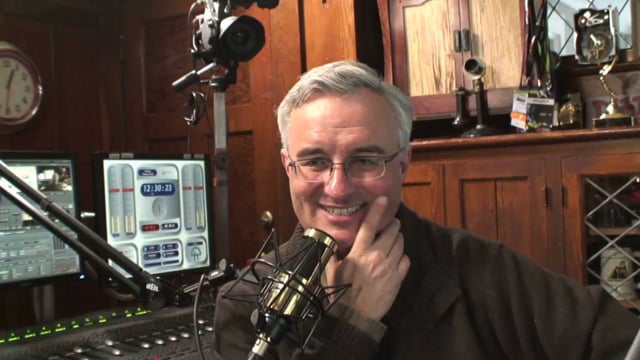 I found this video on the Inside TWiT TV blog, posted by Dane Golden, who is unfortunately credited as Dave in the video itself. It’s a 20 minute look inside the TWiT cottage including chats with Leo, Dane and Colleen - the engineering genius behind it all. Well worth a watch, particularly if you are crazy Leo fans like us. The video builds on something I wrote about previously - whether watching live streams is the future.

After watching the video, Mr C and I began discussing what we had seen and I pushed for him to write a blog post. He said he was too busy, so instead, I grabbed a microphone and recorded the conversation. It was a bit impromptu and the audio wasn’t that great, so I have transcribed it instead. One day I will get Mr C onto an MFC podcast. Anyway, here are our words - we meander around the topic and don’t really come to any definitive conclusions. Interesting, nonetheless.

Mr C: Leo has come to almost identical conclusions that we came to near the end of last year.

Christine: I already posted about Leo’s thoughts though, so it’s not news to him.

Maybe I heard him say it, I can’t claim to have invented this concept. It’s simple to see. The facts are audio growth is slow. Audio growth for Sidepodcast specifically is slower than the popularity of the site. Some of that will be down to the fact we’ve broken the site and it’s hard to find the player. There are other reasons simply than it’s not as popular as it was. We’ve made changes detrimental to audio enjoyment. But F1 Minute hasn’t done that. It’s stayed exactly the same.

Comparatively speaking, we know that live streaming has become more and more popular, to the point the server couldn’t handle it. At one point it died after 40 seconds.

That still hurts you, doesn’t it?

Yea. So, we know that live streaming is growing. We know that video is popular from Sidepodcast. But when we introduced F1 Minute video, that was quite explosive in terms of growth, feedback, interest, etc. In the last five months, F1 Minute has grown by 400 users, regular users, people who subscribe to the feed. That number was topped by F1 Minute video within a week.

Subscribers who subscribed and are still subscribed even though we haven’t put a video out in weeks. F1 Minute Video in iTunes, I think last time I checked, was higher than F1 Minute audio, even though audio updates every day, and video hasn’t updated for six weeks.

So we know that video is more popular than audio, but the difference is when I subscribe to that in iTunes, I can take that away with me and watch it wherever I like and I can listen to it wherever I like. But Leo’s telling me that what I need to do is tune in. Which is so old school, I mean, when was the last time you had to sit down and watch something at a specific time?

We lost something, socially, when PVRs became popular.

I was just reading something, that they’re doing these event dramas on the BBC and ITV, where it’s a part every day for five days. That’s really, it’s an event drama, it’s a piece of artwork, it’s specific for that week. It’s a new fad. The point is, that it’s becoming quite popular, but lots of people just PVR it and watch it later, so what is the point of scheduling something every day when everyone’s just going to watch it at the end anyway.

Live is interesting for broadcasters because you can’t skip the ads, and that’s the only way you’ve got of really selling ads on television anymore. Most people now have some form of PVR, some means of recording and time shifting. Time shifting has killed the advertising model at a time when advertising was suffering anyway. You’ve got live, which is wonderful for people who need money, and therefore that makes it interesting.

Yea, absolutely. And harder to do. But if it’s a choice between making some money and no money at all, which is the option if you’re advertising in traditional forms, that’s more preferable, I guess.

We lost something socially when people stopped watching television programmes at the same time, say Eastenders, and then going into work the next day and discussing it. It still happens, although not in offices I frequent because mostly they’re technology offices and nobody really watches Eastenders. The ability to watch Eastenders as an omnibus to a degree killed it, and the ability to watch it on iPlayer two or three days later, or whenever, make it three days out of date… means people could no longer talk about things as an event. Some people have forgotten, some people have moved on. Three years ago, Top Gear was the talked about show on a Monday morning in every office. Guaranteed, it was the talked about show. You could talk about it for a good hour.

Did you see it when they set fire to that caravan?

That kind of thing. The popularity dwindled, but actually, before it did, most of the conversations I was having with people were: “haven’t watched it tonight, gonna watch it on Virgin tonight.” Because Virgin Media timeshifts everything. The ability to timeshift stuff has meant we’ve lost something and I think live shows will probably give that back to us because you have to tune into a live show all at the same time. I know that in our office, we all went home one Wednesday evening and we all tuned in to see Steve Jobs live, and we all tuned in to watch Leo, as Leo said earlier he was the only person who was streaming it. We all went in the next day and we all talked about it. For that reason, live is bringing something back that I think was probably missing. There is something in social terms to be said for that. Which is why if you do a live event, like a Formula 1 show on a Sunday night after a race, that is socially quite unique.

It seems fine to me that if Leo does his live stuff, which he does, and he seems to be offering it up everywhere, but he still provides audio for the people who want it that way.

Of course. You pointed out something completely different, on a totally different line. We were talking about the RSS feeds - full feeds vs. truncated feeds - and you said to me the other day, you can’t take away… once you’ve given something to somebody, you then can’t backtrack.

Well, if you do, people will hate you.

Yea, so what Leo is doing is… in Leo’s mind, he’s thinking, there’s not enough growth to support audio. Video has growth, live has growth. We can do both. We’ll keep doing audio, we’re not going to ditch them, it’s the same thing. The same way that full feeds and truncated feeds is the same thing, the only question was if it was socially acceptable to do it. Technology wise it wouldn’t make any difference, a two minute job to turn it on or off. Same with podcasting. Once you’ve got the content, you can podcast it within a heartbeat if you’ve got it set up correctly. There’s no trouble to do it, then there’s no harm in doing it, but what he’s saying is, that isn’t going to drive business. That isn’t going to make us money, that isn’t where he thinks the long-term future is going to be. And I think, the way I consume media, I’m following his path which is - if Amber MacArthur tweets and I’m watching Twitter, which is normally because I’m having a break or haven’t got too much to do, if it says I’m on TWiT in 30 seconds, tune in. That’s a button click away, there they are. No effort at all.

You were saying that you don’t subscribe to any podcasts anymore.

My iTunes feed reader still has stuff in it but it’s for debugging, and I have a few things so that I can compare download speeds. But I don’t consume that way. I like, and I prefer his videos. The other thing I can do, is if I feel in the mood for watching a video, I can go to his site and just click on the video link, and that downloads in the background.

Yea. See, I like the audio and I subscribe to many, many feeds, as we know. I have about 3 million podcasts to listen to, and I do drive a long way and consume a lot, and I have my ears in all the time, so I’m always listening. But I can get on board with watching things live and watching things on the web, if it wasn’t in Flash, but there’s no organisation with that. There’s no way of knowing there’s something there, there’s no way of keeping track of it. I mean, you can subscribe to RSS feeds, but then it’s just a long list and it’s not…

It depends on the quantity of content you’re consuming. I can count the number of shows I like of Leo’s on one hand, and I can remember what happened in the last show that I listened to and therefore in my head, I can keep track of where it is. That’s because I follow one producer and I only follow three of his shows. There are a couple of others I sometimes tune in to, that’s it really. I have a small brain but I can keep on top of that. You consume far more content, but the other thing that’s interesting is that obviously Leo and I are both males, and maybe we can’t multi-task, and I wouldn’t be surprised if that doesn’t have a greater impact on.

I listen all the time.

See, I’m trying not to think most of the time.

It’s the complete opposite.

It’s interesting that Leo said he doesn’t know live is going to make money, he’s just betting on it. He doesn’t know it’s the future but it’s what he thinks.

No, true, and they haven’t made money on it yet, and don’t know when it’s going to happen. But I didn’t know he wanted to make it 24/7, that makes a lot more sense. At the moment when you go on, you’re almost guaranteed to hit a re-run.

Because of the time difference. Another thing is, you’ve said, since we’ve been doing non-live shows, which is unfortunate, that we get more comments on a post, but if you compare that to the number of comments we get during a live show, it’s nothing. There are people there, gathered, watching and engaging.

It shows the power of what we’re doing that people will give up their Sunday night to do that. The point about feedback, I would suggest is, because we have to go out on a limb and say what we think, and no one is there to catch us, more mistakes go out, and that creates more conversation and I think that mistakes create conversation. Which you don’t have, can’t have, with a room full of intelligent people following you and correcting you.

Which could be conceivably better.

Yes. It’s better than sending out incorrect information. It depends though, I don’t know. I would say, in the future, live shows are of equal if not more importance than downloadable audio shows.

But I don’t think you can discount audio.

No, never. I don’t think now that podcasting has happened, like you said before, the genie is out the bottle, people will always expect that.

← Previous What's that coming over the hill?
Next → The Elite Writer's Journal